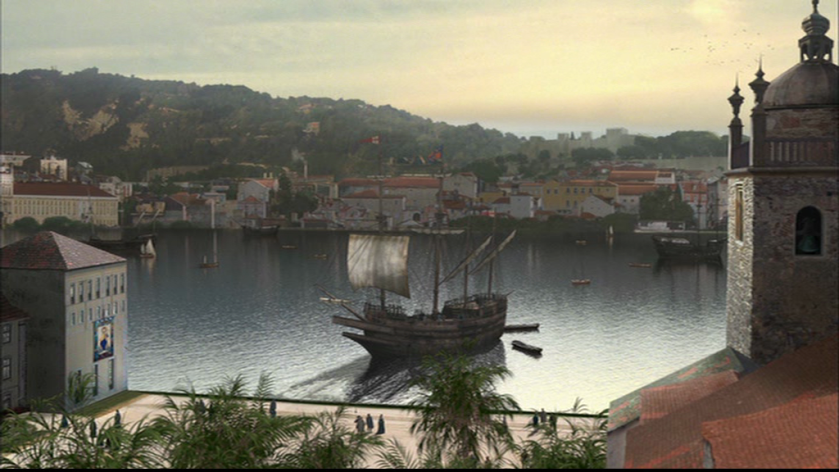 Load up the next recap in a new window->

An Evening at Court.

We open on Henry and Wolsey, who are really enthused by their intriguing this week. 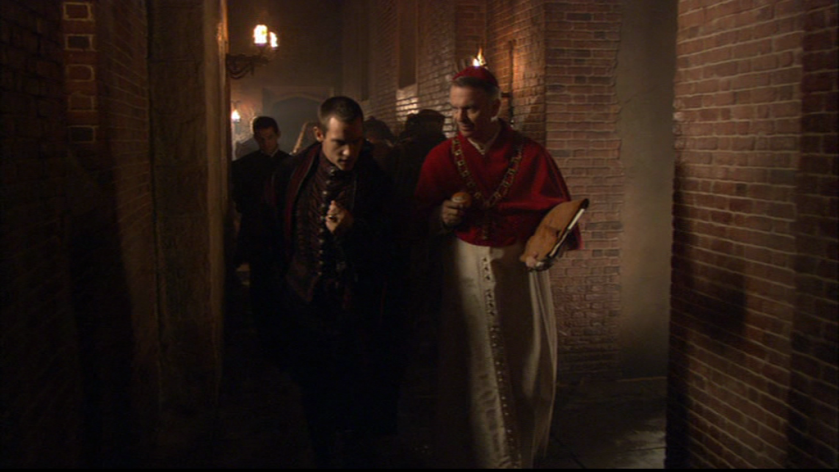 The Battle of Pavia went so well for their ally, Emperor Charles V, that the French army is broken and King Francis captured. So Henry is straight into overreaching. He wants to know what Charles plans to do with Francis, and now that the French are on their backs in the sand, Henry would like to swoop in and give them a swift kicking. He promises men, money and ships, all of which he has surplus of, so it appears the main English contribution to the war effort was changing sides so the French stood alone. All the same, we’re not letting that hold us back when it comes to wanting our share of the spoils.

Wolsey barely gets chance to introduce intern Cromwell before Henry is completely distracted by Anne’s arrival back at court.

He manages to secure a meeting with her by literally physically swiping right here, before striding into a meeting with his wife and daughter about 10 feet away. Did Catherine notice?

Are you kidding? Of course Catherine noticed. And we’re about to see an example of the displacement activity that often goes on around Henry. Catherine knows that she can do nothing about Henry’s affairs, so does not complain about it. Instead she suddenly decides she cares about Wolsey opening her letters, and complains about to Henry about that.

Henry asks if she is sure that this is happening, apologises and says he will deal with it. He also says that Wolsey:

“…can be too zealous. But it is always in our interest.”

So Henry stops Catherine short of further complaint against Wolsey. And this whole conversation has been a lot more about reassuring Catherine of the security of her position as Queen when Henry is pursuing a new mistress than it ever was about Wolsey’s Spies’ mail opening habits.

“Unless you have secrets.” Says Henry, startling Catherine a bit, but it’s clear that that comment was directed here: Where George Boleyn has been needlessly dicking around with his sister’s necklace until Henry notices. On a rewatch, I think his father probably told him to do this to gauge how interested Henry is in Anne, by exiting Henry’s jealousy in a ‘safe’ way. Anne certainly has no idea why he’s doing it, because her expression and tone are very ‘If we weren’t in public I’d be twisting your ear right now, you sodding idiot.’.

Onward to the actual business of the court this evening and enter Anthony Knivert who made it after his nasty jousting accident last week. Yay! He’s got a nifty new scar and he’s here for his knighthood. After his day threatened to go so wrong he will actually be called a knight at the end of it all so good for him.

And then he hears Compton also get called.

Yeah, once again, the English fucking love a jape. Knivert was brave, and showed real grit, but how funny was he during that life threatening injury? Not enough, Sir Anthony, not enough.

Also, Knivert was kind of trying to take a level over Compton here, and it’s time they both accepted that their side quest for money and titles has met with success and they are equal second best friends to the King. Lordships may one day be accessible for them, but they’re going to have to start a whole new questline for that. Accept that you get the same gold and XP as Compton, and move on. Which he does.

In a room, somewhere in London, a secret society meets, to hear a lecture by a foreigner about heretical religious ideas. At this time the (at that moment, seldom used) punishment for such heresy is death by burning. They burn you alive. They actually ‘Lord of Light’ your ass if you don’t recant.

…you know, just hang out.

I think the speaker is from the Netherlands. There’s also a possibility he’s from one of the German territories or Swiss.  Which tells you that a) I am terrible at central European accents and b) large swathes of central Europe are already undergoing religious reformation at this time. The Protestant train is rolling in Europe, there are territories that are Protestant and managing to exist independently, some that are Protestant and are either fighting or about to fight to stay that way, and the English state now has its own Protestant influence very close to the heart of government.

Henry meets with Anne in a quiet corridor and there’s a palpable chemistry. They clasp hands, their theme starts up, he tells her he desires her with all his heart, and he would really like to know who that young man was with her earlier.

Holy fucking shit that is quite the red flag. Well, it’s a red flag to us, but to them, ‘threatening to choke out your beloved for sexual history information’ is apparently just one of those funny little courtship things. And they both smile and, my god, even laugh a little at the mistake when it turns out he was being jealous of her brother. Then they briefly make out.

The ‘Yeah, In Hindsight…’ meter stands at a solid 1, at the very, very least.

Meanwhile on board the HMS Refactory Period.

Brandon and Margaret have arrived in Portugal.

Margaret is a woman that will be living in disbelief right up to the completion of her wedding night. Starting here, and up until that moment she will be asking questions, looking to everyone and everything, desperately trying to find a way out of her total powerlessness and a situation she cannot quite believe she is in.

Somehow Margaret and Brandon have humped their way into being a couple. Brandon stops teasing her when she tells him to. She says she should hate him, and he says:

“What will I do?” she says. And there is no answer.

Any hopes of finding the King of Portugal to be an old but kindly man disappear with the first introduction, and our first impressions get heavily reinforced throughout the episode. He is a rude, loud, uncaring and abrasive horndog. His feet are either gangrenous or ‘so dirty I mistook them for dying flesh’ so you know, not great either way.

Margaret’s sense of unreality hits its height during the wedding ceremony.

And Brandon starts twitching during the ceremony as well. The wedding night is ghastly. It’s an ‘in public’ situation, with a crowd right outside of the bed curtains. We’ve been alongside Margaret all through this day and it’s a relief when we move outside the bed curtains too.  There’s a lot of noise, including Margaret’s chorus of ‘ergghs’ and a wavery noise at the end.

Well, at least it didn’t last long. The curtains are whipped back, the priests ask if the King finished, Margaret nods yes, and everyone is very pleased. There’s applause etc. And Margaret at some point has snapped right out of her dreamlike “What will I do” state and is suddenly looking at her gasping new husband with a very keen interest.

Meanwhile in England, the power divide could not be more obvious. Margaret is bartered away for political advantage, while Henry ignores his politically advantageous marriage in favour of a headlong pursuit of Anne. He simply cannot keep his eyes off Anne when she is dancing, even in front of Catherine.

This could be a nod to actual historical Henry who was known to be particularly partial to graceful women (He also liked women slender and was a devotee of shape rather than size in the breast department, if you were curious).

He writes her love letters. When we cut to Anne reading them, it becomes clear that her father is there. And he’s there because he delivered the letter and is about to collect it back as soon as she’s finished.

Anne is not quite so easygoing about being one of the last people to read her love letters as she has been. She doesn’t say anything, but that facial expression is no longer completely fine with the level of intrusion she’s getting.

Henry is out riding with Compton and Knivert. Stopped by a flooded ditch, Henry decides to pole vault it. The pole snaps, and Henry ends up head down in the murky water. 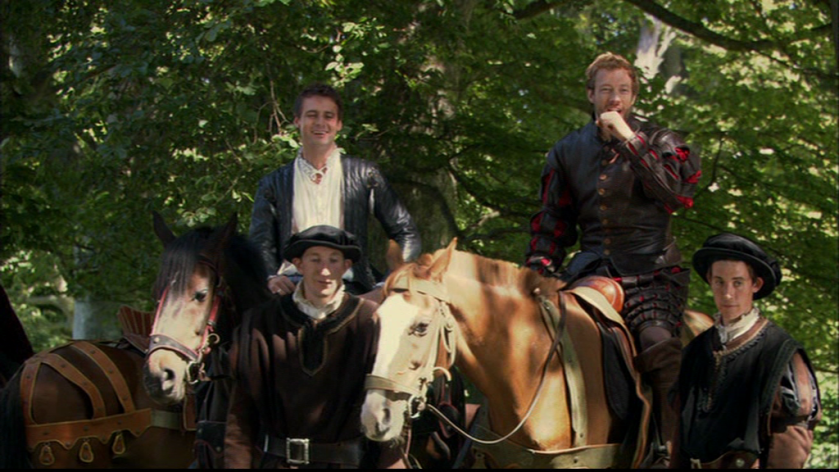 Compton and Knivert are still laughing at Henry’s kicking legs when a servant notices that Henry just isn’t getting back up and leaps in. He pulls Henry out of the mud he was stuck in, turns him around and smacks him on the back, dislodging the stuff that was choking him as Compton and Knivert finally realise the danger that just passed.

The morals of the story

Brandon asks Margaret to dance on his last night at court. It is good to see Margaret go from ‘What is happening’ Margaret to ‘Working it’ Margaret. And she and Brandon work it together during their dance. Brandon has a tale to tell her with some half arsed wisdom and a very strong subtext.

In England, Henry has been bled and fretted for a few nights. He finally unburdens himself to Wolsey, who starts off not getting it.

But picks it up pretty quickly.

The status quo has a lot of inertia because it is almost always the safest response. We don’t reach out of it unless we have to. But every once in a while the times change and that inertia becomes its own deep danger.

Henry’s accident has made him alive to the danger in his current position. A daughter and a bastard son are all the heirs he has, and if he had died his house would have ended, with England thrown right back into chaos.

Henry, unlike any of us, has the power to decide that the times have changed. He is emphatic, he identifies the problem as his marriage. Wolsey gets his marching orders. With his shield or on it, Wolsey is to get Henry a divorce from Catherine of Aragon.

Back in Portugal – who is this young woman, full of zesty determination?

She moves away from the window, and then she spends a long time looking at her husband, the King of Portugal.

And a long time looking at that pillow.

And then she picks it up.

And as his legs jump around the bed, I think the moral lesson for me is that if your character is enough of an offensive twat, and if she’s has a really hard go of it then I will chant “Follow. Your. Bliss. Follow. Your. Bliss.” in support of your murderous wife. Oh. wait…waait… …your murderous widow. Get it, girl.