May 5, 2018 autocratonasofa Recaps, The Tudors Recaps Leave a comment

A great wave of death is coming.

The Tudors wasn’t in a rut, but some elements had got into a definite pattern. The endless dance of the Imperial/French allies,  Henry’s increasingly into Anne and annulments, Wolsey over promises and under delivers in a different flavour every week, etc.

But a cataclysmic event just hoved into view for episode 7. It’s the Sweating sickness, a disease that finally managed to break into the ‘Possible End of Days’ Premier epidemic league with its 1528 season.  It’s going to start slow and then increasingly break up the drama, until it consumes the episode’s entire second half.  It’s also going to seriously damage the social fabric and the body politic of the society it’s about to rampage through, despite the best attempts of the medicine of the time.

The Sweating sickness, or ‘English Sweat’, was a disease that disappeared before modern medicine ever got a chance to take it on, so we don’t know much about it. The Tudors will manage to show this disease consistently for both its characters in their universe with their 16th century medical and metaphysical outlook, and a 21st century audience so awash with evidence and information that you didn’t even move your hand and click on that link to find out that the Sweating sickness was probably some kind of hantavirus and the last outbreak was 1551, because it wasn’t information you really needed right at that moment.

If you’re looking for an MVP this episode, it’s going to be Trevor Morris’ score, which runs in different tones from melancholy and cloying up to screeching violin tension and doom drums. It might be an increasingly distressing week for the characters, but it’s going to be a great week for drama. So, surf’s up, bitches, and let’s ride this wave of corp…

God Dammit. First up for the sickness is Compton. I liked Compton.

He is shivering, moaning, and incoherent. His servants fetch a physician.

The physician has a plan. He’s going to cut into Compton’s back, because he has heard it sometimes works. Oh , he’s got a great reassuring tone, but the course of treatment he’s going for is basically at the same evidence level as some bullshit overheard in a pub. To bring us all the way up to 21st century bullshit this is all in an attempt to ‘release the toxin’,  it’s just that he’s going to determinedly release that toxin with a miniature hammer and chisel arrangement as opposed to a wheatgrass cleanse and some deeply flatulent yoga.

Do we still do Lunch?

Yes. Lunch will be at Hampton Court.

Wolsey is hosting Anne and the King. There’s a moment where Joan pops up, dressed for dinner and asks can she not meet the King? And Wolsey ushers her back into the corridor with something like a ‘No woman, Out! Out!’.

It’s one of those tricky social situations. Everyone is desperately trying to avoid calling Anne Henry’s mistress on pain of possible death. So bringing your acknowledged mistress to a meeting with Henry and Anne would be implying some kind of parity between them and be a truly terrible plan. Sorry Joan, back in the corridor with you. Wolsey could have put that better. He’s a bit stressed.

Anne has been considered very minor nobility up until this point, and she is clearly thrilled at the level of deference she is now shown by the most powerful in the land, and Henry is delighted to be able to provide that for her.

Henry and Wolsey go through some business. We’re allies with France and at war with the Holy Roman Empire again (well, it is Thursday), and Francis has sent some great presents. Henry gets a bit maudlin when he says that the Emperor has just had a son.

And then it’s that awkward moment as a third wheel when you have to wait for the young couple to stop sexting each other long enough for you to comment on the food.

Wolsey then outlines Plan D in Operation Get an Annulment. He’s sending two lawyers to speak to the Pope in Orvieto. He plays up how restless and determined they are and that they will not leave Oriveto until they have an answer from the Pope. This sounds just right to Henry.

In the Garden with the Queen

Ambassador Mendoza and the Queen are talking, and having a bit of a whinge about the English. Wolsey hasn’t been letting Mendoza see the King. There’s some intrigue news.

Catherine leaves her ladies in waiting behind, and tells Mendoza to continue. The Emperor has firmly and decisively sided with Catherine and already threatened, sorry, firmly written to the Pope pointing out why an annulment would be a bad idea. He wants Catherine to stay strong (might as well remind her to breathe). She says she will try, but reminds the Emperor that politically speaking she is out of the loop, now.

The end of the day at Compton Wynyates

Compton didn’t make it (Goodbye Kris Holden-Ried, graduating class workhorse of The Tudors – it’s a long scroll to get back to 2007 on his IMDB). Henry sent his physician, Doctor Linacre, down to see if he could help, but there was nothing he could do. He is explaining this to Compton’s common law wife, who is called Miss Hastings.

She asks to see the body, and Doctor Linacre endears himself to me immediately by admitting how little they know about the risks of this disease. Better to be treated by him than Dr. Hammertime, anyway.

Yeah, so sending two lawyers to the Pope is a great idea. But hearing about these ‘restless’ and ‘determined’ lawyers at lunch, I was rather expecting them to be champing at the bit already. Perhaps they had already approached Wolsey, arguments in hand.

Instead they are both about to be briefed on the case and are being told just now how enthusiastic and relentless they’re going to be, and after raising some pretty pointed questions they walk out of here with an attitude best described as ‘Sure, we’ll give it a shot.’

On the other hand, one of them appears to be ‘From France’ from Episode 3, his name is Mr Gardiner and he has brought a friend who appears to be another champion of the straight talk express. Wolsey wants to (rhetorically) know why should the Pope prefer the Emperor over the King of England, when the Emperor has treated him so poorly?

Wolsey says that if all else fails, they are to use threats. One way or another, through the papal courts or outside the annulment is going to happen. It’s the first time it’s been mentioned by anyone involved in government, it’s not even an out and about threat yet, but the prospect of a break with Rome has been spoken for the first time.

The lawyers finally have something new to put to the Pope, and they are on their way.

It appears to be a few days to a week since Compton died, I think Tallis has heard, and is on his way to his house.

Miss Hastings tells Tallis about Compton’s servants starting to take his things the day after he died. Which may not be pretty but they do have families to feed and no job.

Fortunately she managed to save the items Compton bequeathed to the King, in a secret compartment of the room he died in. Where it has been since he died.

Tallis goes to the churchyard where the business of disposing of the dead goes on around him while he mourns for Compton. The music is still in his head but it’s a lament, and the last time he was here Compton said he loved him, and Tallis didn’t say it back. He ends up expressing his rage and sorrow by taking his most treasured object, his lute, and smashing it on Compton’s grave marker.

Back at court, Wolsey is on the prowl and his scented orange game is in full effect.

Oh there’s always some dip that wants to see if they can get you to dance to a hand gesture. Norfolk gets told to practice his particular brand of assholery at home from now on. He is to return to his estates and supervise grain production and North Sea trade. Oh, how he bristles at the word ‘trade’.

Looks like Norfolk really did go too far trying to get rid of Wolsey last week. The price is a limited kind of exile. That’s as far as it will go, his side is in the ascendancy after all. But Norfolk did not notice that he is, in fact, the most disposable member of his alliance, and that point guy against Wolsey is not a good position to be missing from.

Compton’s bequest has arrived in London. Henry shows decent awareness for a rich guy by pointing out that they should send the valuable jewels back to the unfortunate lady. There is a short time of morning for their friend and then fear propels them forward as they talk about surviving the sweat.

Henry is a doomsday illness prepper and maintains a whole cabinet of medicines.

He’s armed with some of the best knowledge of his time and almost unlimited resources, and he is still nowhere in combating this.

The last person we knew at Compton Wynyates has died.

Tallis writes a funeral anthem. The two ladies of court who appear to rather like Tallis come up lady creepin.

But when it becomes clear he’s thinking about Compton they leave him to himself politely enough. Then suddenly he changes his mind and wants to speak to Joan, the slightly taller, slightly thinner one. He says he saw a halo around her head and she thinks that’s weird.

He asks if he can kiss her and then does. Bloody bisexuals don’t care about your mental filing system, they will not pick a side. He’s making sure to live a little while he can, and I’m sure that Compton would approve of that.

Now, not all of us will one day eat picnics off gilded plates, with figs, grapes and a whole wheel of cheese on tables some poor bugger had to cart out to wherever we wanted to eat.

This fancy picnic is to welcome the new French ambassador. He has encouraging news about the war (Charles HRE is losing in Italy), graciously greets Anne who gets to show off her diplomatic skills, and it’s all going great until a small voice yells from the undergrowth:

“Go back to your wife!” (A commoner is actually supposed to have done that when Henry was out riding one day, he wisely never did show his face.)

Oh there is something very, very wrong when they get back to Whitehall. 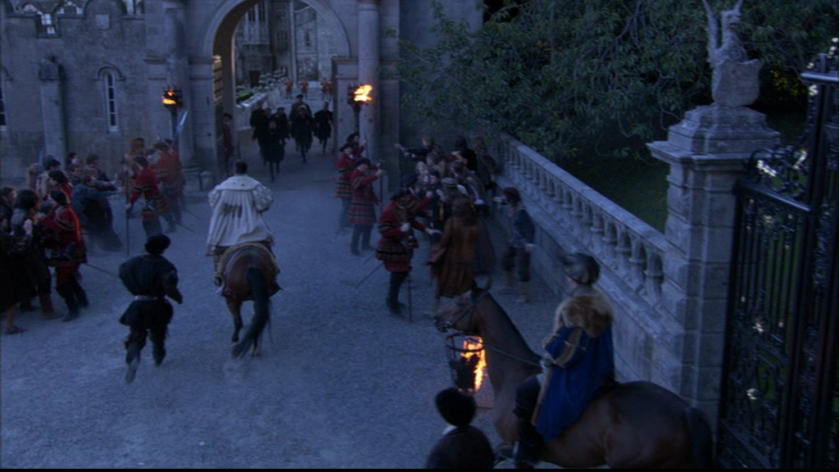 The Sweating sickness has reached London, and there have been 300 deaths that day alone. The cataclysm’s really settling in and the rest will be covered next week.

This week’s recap was a little early for the same reason next weeks’ may be a little late. I am on vacation for a week and so will be having experiences outside in… (peers suspiciously out of window, points vaguely) The Nature. The rule is no wi-fi. I can totally do this.

But I am an Autocrat of my tagline and there will be a post for next Sunday – but Sunday might need to last about 20 hours longer than normal for me to make it in time.