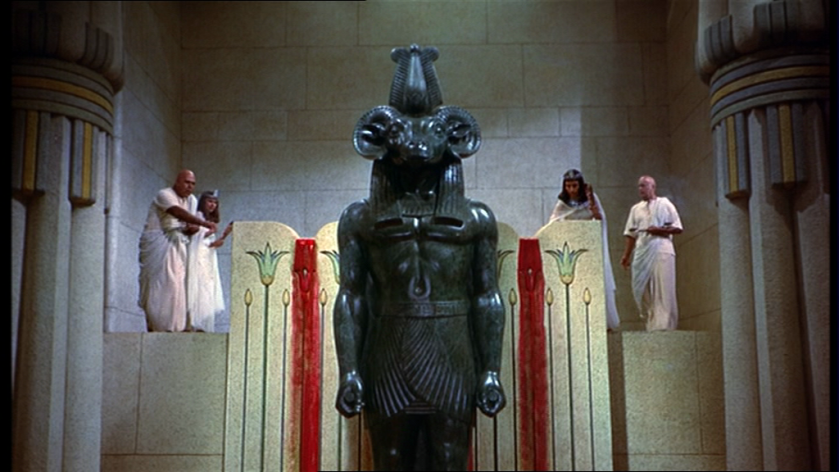 6) However Many Plagues You Remember, There Shall Be Fewer On Screen Than That

Welcome to the Entr’acte.

If you feel like listening to it, get it going now because this one is over 2 minutes.

An Entr’acte is an inter-act piece of music whose purpose started off in Opera, was then used in musicals, and in the 50s and 60s got used in long ass prestige films. This one is remorselessly up beat and loud because Cecil has divined its purpose for the prestige film: to call patrons back from the pee.

It also means he gets to skip past a really odd piece of the Bible text- Exodus 4:24 where God experiences Prophet creation regret and meets Moses and his family at an Inn on the way to Egypt, attempts to kill Moses and is only prevented by Moses’ wife throwing a fresh foreskin at the situation.

It’s one of those deeply weird turns the Old Testament takes from time to time, and then carries straight along like it ain’t no thing. If David Lynch were tackling this story we might have got God acting like a Japanese vengeance ghost, but that’s never going to happen in Cecil B. De Mille’s movie, so forward, past the weird stuff…to Egypt!

We get an actual sunrise over the Pyramids, while uncle Cecil narrates us back in. He basically takes 30 seconds to say “Yeah, so Moses came back” and then we’re into Rameses throne room on ‘Give Pharaoh Lovely Presents’ day.

Rameses has gone all in on black basalt feature pieces for his sandstone throne room and as one of the gifts we get to see the Egyptians discover silk.

Pharaoh’s security is damn lackluster, as Moses and Aaron saunter up and just get through on attitude alone. They are assumed to be emissaries from Midian. When Moses speaks, no one is that shocked that he’s alive but Nefritiri basically melts and Rameses is mildly annoyed.

If Rameses were even slightly adjacent to a reasonable human being I think I might end up forgetting, despite myself, that Moses and Aaron are there to end slavery because they come across as really up themselves and aggressive front door evangelists.  Fortunately he remains a complete asshole. Moses asks “Who are you to make their lives bitter with hard bondage?”

Moses decides that a quick demonstration of God’s power is in order, so he gives his staff to Aaron (which happens repeatedly before something supernatural happens, and appears to happen so everyone knows it’s a God thing, not a Moses thing), and has him cast it upon the ground.

And Rameses is resolutely unimpressed. Despite the fact that 20th Century replicators had to go for animation and other trickery to get the effect, apparently snake into stick and back again is magicianing 101 in Ancient Egypt. So he calls up two of his priests who get their stick to transform into snakes as well (No one improves the floor). Then we get the gruesome bit narrated. And then Moses’ snake turns back into a staff again. I mean it’s pretty neat, but what Moses anticipated would be ‘let me blow your mind’ got reduced down to a journeyman level trick and some pretty strong symbolism. And Rameses is not impressed with it. He’s dismissive, and his small son gives Moses’ staff a kick. And then Rameses has an idea.

And Nefretiri has to go through an embarrassing moment where it’s not so much that her ex doesn’t want to connect with her, more that he doesn’t even notice she’s there.

The Life of Moses

The Jewish peoples have come through History leaving the distinct impression that they are and have been pretty damn resilient. Not so in The Ten Commandments where they are a crowd fickle enough to fit right in to the Life of Brian. Which, come to think of it, the crowd scenes in this film probably had a hand in inspiring.

Basically, Moses and Aaron walk back into slave town and there’s cheering and tambourine playing, and questions like “When are we leaving?” People are basically packed.

Looks like Aaron or Moses or both had told people they would be leaving after the audience with Pharaoh, and it’s not going to happen like that. Then Moses decides to share his performance guilt with the crowd.

And then Aaron has to break the ‘no more straw’ ruling to them. With a bit of a nudge from Dathan, some genuine malcontents and at least  one ringer placed in the crowd (Keep an eye on Dathan’s brother) it all escalates very quickly.

Moses gets saved from the situation by a group of Egyptian guards that come for him, and Dathan decides to be the greater jerk, and tells everyone to go get their straw then.

Your Ex is Problematic

That phalanx of guards came from Nefretiri and Moses gets delivered to her pleasure barge. The years have not made her less dramatic or insistent. She’s trying to persuade him into…something. I’m not sure how much of a plan she past them getting together again. She’s not put off by the escalation in his religious calling, but when Sephorah gets mentioned, I think Nefretiri is shook. So she brings out the big guns (no, not those, it is still 1956).

One of Cecil’s more endearing qualities was that he wasn’t all that into looks or a particular body shape in his women. Family members said that Julia Faye was the best looking of his mistresses, and she wasn’t all that. What got Cecil hot was luxury dahling. He desired a woman in the most luxuriant fabrics, the best perfumes (he had two perfumes personally commissioned and developed, if you got one as a present you had made it to the inner circle), excellent makeup and maybe some jewels…Oh if you were willing to drape yourself in silk and gemstones then Cecil was going to be there for you ma’am.

Explains quote a lot about his movies, including the above exchange, where two equivalently hot women are repeatedly described as being almost infinitely greater and lesser on the basis that one of them wears wool and has a tan. Leaving aside Moses’ weak non-defence defence,

Nefretiri…is not someone who takes no for an answer. She’s already been a little worrying with her “You think you’ve changed but you haven’t” and with Moses’ gentle rejection she crosses the line into sexual harasser territory. Persuasion becomes coercion.

And I believe the knowledge that “Lovely dust the Lord may use” is all she is to Moses anymore may not go down well.

You Learn Stuff At The Well

Miriam, Moses’ and Aaron’s sister, comes down to the well and tells everyone there to fill all the jars they have, there’s about to be a water shortage. Ooh, I think a plague is coming.

There’s a little pushback (‘This well has never run dry’) but when she says that this is going to happen so fill your jars or go thirsty, she gets consensus pretty quick. Everyone agrees that Miriam is reliable and they’re going to get more jars. Then Miriam spots Joshua looking like a quest giving NPC by the wall.

Lilia arrives, and while Joshua isn’t in the mines any more, Dathan could probably have him killed with a bit of effort, so she’s still bound to Dathan through guilt and shame and need for Joshua to live. So when he asks her is it’s of her own free will that she’s with Dathan she confirms it. 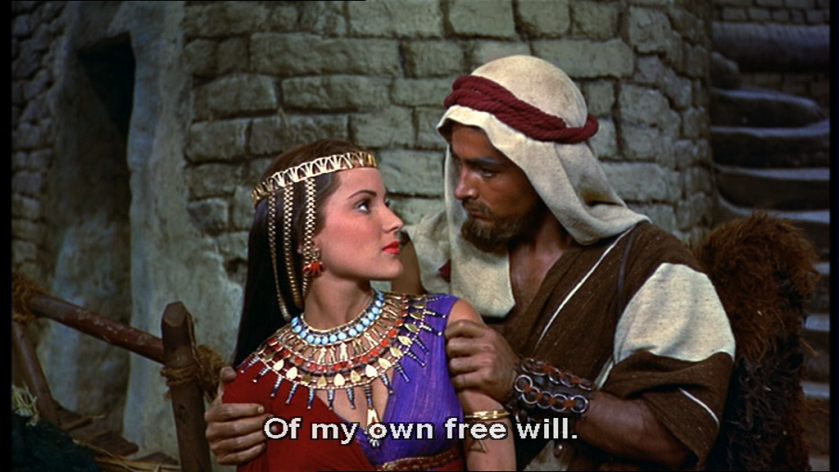 And as sad and worrying as Lilia’s story is, we have to leave it there for a while because we have a plague coming.

It’s ‘Bless the waters’ day for Rameses and his court.

And someone in Pharaoh’s security team needs their ass kicked.

Because there are Moses and Aaron, protesting slavery again.  They come up to Rameses, who proposes a test. They will see if the God of shepherds is stronger than the God of Pharaoh. He will bless the water.

And it’s a good bet, I mean all that has to happen to give Rameses a win is for things to continue as they are. He just needs no disaster to happen to the water in the next 20 minutes or so. Should be fine, surely?

But….But Moses asks Aaron to stretch out his staff into the waters and…

We are off to the races with our first plague, and it’s a nice dramatic one and I also rather love how Jannes (Seti’s old chief priest) is the first to lose his shit and point and exclaim at everything.  Even so, Rameses tries to claim it’s another “magician’s trick” and gets the bigger, holier Nile blessing vase to give that a go.

OK, so here’s where it gets a bit disappointing. The Ten Plagues of Egypt, according to the legend are 1) Blood 2)Frogs 3) Lice/Gnats 4) Flies 5) Pestilence on livestock 6) Boils 7) Hail and Fire Thunderstorm 8) Locusts 9) Darkness 10) Death of Firstborn. Side note, apparently Locusts have a great agent. But most of these are blown right by with a single sentence. And we go straight to the buildup to 7) Hail and Fire Thunderstorm. And at this point one realises that you’ve been kind of spoiled by Exodus: Gods and Kings, which whatever its other flaws really went in on the plagues.

Back in 1956 it was left to the chief priest to list the plagues Egypt had gone through, and explain to Rameses why he’s brought Moses along. The people of Egypt are dehydrated and frog/louse/stinging fly’ed out, they’ve got boils and no livestock left.

But Rameses has been on snopes.com and heard about a mountain,

And points out that after the poisoning of the water the plagues have followed a natural progression: Water poisoned, fish die, frogs leave the water, flies feed on the carrion, disease follows. Uh-huh, so that papyrus you’re reading isn’t just for show, Rameses.

And Rameses notices it turn a little cold, and then there’s hail, which is sudden and unnerving but not conclusive.

And then we cut to Rameses’ throne room, after the flaming hail and three days of darkness, and he’s ready to give in. Oh, he tells his court that they are ‘whining like children’ but he’s just waiting for them to insist. So, once they’ve pleaded with him enough that he can blame it on them…

Great, lets stop the madness and get this deal done. Then Nefretiri sidles up and commits an act of monumental selfishness. She still wants Moses and her leverage on him is the Jewish slaves’ freedom, so they can’t go free yet. At least not until she makes it happen for some of that sweet, sweet gratitude. So she prods and prods at Rameses, telling him he is removing his son’s birthright to have his own treasure cities built. And going in, and in, that Rameses is capitulating to Moses, that his son shouldn’t stay to see him humiliated.

And she gets her way. Rameses decides against the order to let the slaves go and treads the papyrus into the ground when Moses arrives.

Rameses and Moses face off, and Moses comes down the goddamn mountain at him.

Rameses is mad as hell, so he gathers his court around him, and picks out the military leaders. He’s decided what he needs to do to dominate this situation. He’s going to make his own plague upon the Jewish slaves.

And damn, after what Moses said, I think we’re coming up to the big one.